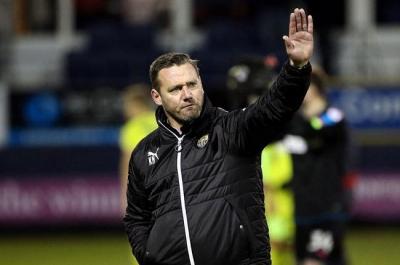 Kevin Nolan has outlined the need for Notts County to put the FA Cup elimination at the hands of Swansea City behind them and focus on the upcoming League Two trip to Barnet on Saturday.

While the Magpies were in action at the Liberty Stadium on Tuesday night, Accrington Stanley beat Swindon Town to move up to third in the standings, nudging Notts into fourth.

Although saluting his side's great cup run and describing the Swansea replay as a welcome "freebie", Nolan says there are "different things to worry about now".

“I can’t see it affecting any confidence in terms of what we are doing in the league,” he told the Nottingham Post.

“The cup game was a freebie for us and it has been a great run. It’s been fantastic for the fans and for Alan Hardy and myself.

“We can be disappointed yes, but we have different things to worry about now and we are looking forward to another difficult game at the weekend.”

Following the Swansea game, Nolan also gave updates on Elliott Hewitt and Matt Tootle and hoped that they would be fit for the trip to the Hive Stadium.

“Elliott picked up a bug so we wanted to keep him away and he stayed back at the hotel,” he said. “Toots played in a game behind closed doors and got 70 minutes in.

“So we are getting there with all the squad and you can see there is good competition for places. I am hoping that we will have fully fit squad for the weekend.”