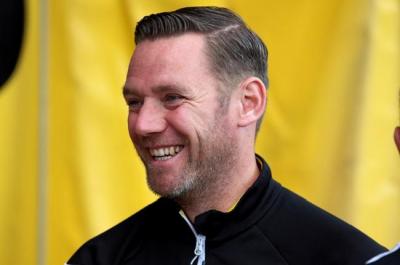 Notts County manager Kevin Nolan has revealed that Kristian Dennis is in line for his first pre-season appearance this weekend.

The forward, who scored 21 goals for Chesterfield last season, missed the Magpies' opening three friendlies due to injury.

However, Dennis is now back to fitness and Nolan says he will be involved against Leicester City on Saturday at Meadow Lane.

"We were gutted when we realised he wasn't going to be with us for the last week or two but he's come back and really had a good go.

"He's settled in well with the lads and I'm really looking forward to seeing him play at the weekend.

"He comes alive in the box. What we've got to do is make sure we're ready to supply him with lots of touches in that area. I'm sure he'll get his rewards.

"But it's the same with the others. Jon Stead is at the front in all the running at the minute. You wouldn't have thought he's 35 - it's unbelievable. He's come back absolutely flying.

"Kane Hemmings looked really sharp when he came on last week, too. It's competition for places - it's what we want."