Kevin Nolan: 'Notts County got what they deserved' 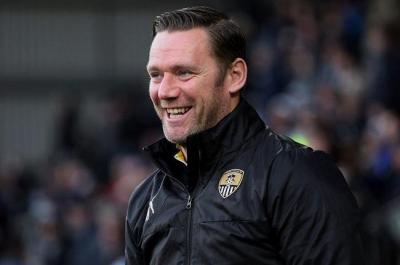 Kevin Nolan says Notts County "got what they deserved" as they recorded a stunning 4-1 victory over Crewe Alexandra at Meadow Lane on Saturday.

The Magpies were watched by upwards of 17,000 people at the ground and, even though they conceded after just eight minutes, rallied round for a comprehensive win.

Shaun Miller opened the scoring after a defensive hiccup, but Noor Husin equalised with a Roy of the Rovers-style wondergoal on the quarter-hour mark.

Elliott Hewitt then grabbed a brace and Derby County loanee Mason Bennett added a fourth for an all-round fantastic day for the club.

"I enjoyed it," Nolan told the official Notts site.

"I thought the lads were fantastic and got what they deserved. It could have been more than four - some of the chances we created and the play at times was magnificent.

"I was a bit upset with the way we conceded the goal, and at that point I was thinking 'Typical us!' because we had started well, but that already seems like a distant memory.

"The goals showed what the team possesses. There was individual brilliance as well as team goals. At times it was a real joy to watch.

"Richard Thomas [assistant manager] works tirelessly with them about being patient in those areas and finding the quality, so the third goal has come straight off the training ground. It doesn't happen by accident.

"It was nice for Mason to come on and give us an injection of pace and something different to what we already have. I'm delighted that he got a goal on his debut."