Kevin Nolan: 'There is no mini crisis at Notts County' 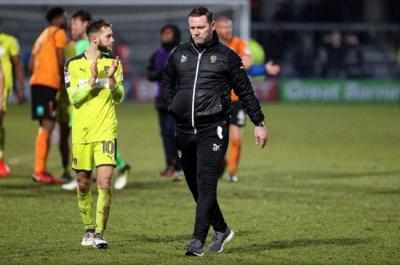 Kevin Nolan has reassured fans that there is no "mini crisis" at Notts County and that the players will be hoping to put their hard work on the training ground into practice against Carlisle United tonight.

The Magpies' league form has tailed off in recent weeks and a 4-1 win over Crewe Alexandra was followed up by an 8-1 trouncing at Swansea City in the FA Cup and then a 1-0 defeat at League Two strugglers Barnet.

Despite County's form taking a downturn, which has culminated in the club dropping out of the automatic promotion places, Nolan is adamant that everyone involved in the team is singing from the same hymn sheet.

“Everyone outside the club is probably treating it as a mini crisis, but let me reassure them,” Nolan told the Nottingham Post.

“I want to apologise to the fans who went to the game. But I must mention the fans I saw on the way back.

“One of them patted me on the back at the services, shook my hand and he said he was here when we lost 10 on the spin.

“He read what I said and he said that’s all he wanted – pure honesty.

“That means more to me than anything else. There’s no mini crisis here, we all know exactly what we are supposed to be doing and trying to achieve.

“I always said it was not going to be smooth. These are the times you learn more about your players, your staff and yourself.

“We’ve worked as hard as we always have and hopefully we will show that on the pitch on Tuesday.”