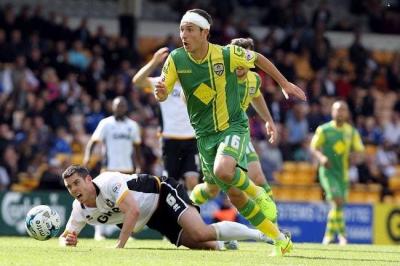 Unattached midfielder Liam Noble is training with Notts County, according to a report.

The 26-year-old's Forest Green Rovers contract was cancelled by mutual consent on Tuesday with the club citing his desire to be closer to his family in the North-East of England.

Noble's departure from Nailsworth has led to much debate among Magpies fans over whether the player should return to Meadow Lane.

A source at the club's training ground has sent us two pictures of what appears to be Noble in training alongside the Notts players.

Noble is presumed to be the man in the centre of the pictures, standing next to the free kick mannequin.

This season's training kits appear visible in the photos.

Noble was subject of a number of bids from Notts over the summer which went up to £100,000, which were rejected by the New Lawn outfit and led to a war of words between the clubs' chairmen.

The maverick midfielder can only sign for a Football League club in the new year, but is currently free to sign for National League clubs not restricted by the rules of the transfer window.