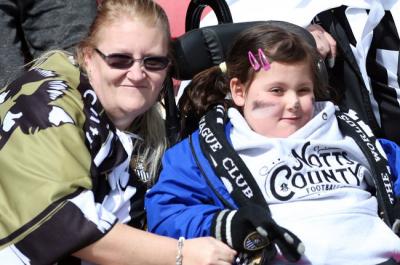 When Maisie-Grace was born, she had a hole in her back with the spine and nerves exposed.

Her first operation, to close her spine, was when she was just three hours old.

Maisie-Grace spent six of the first 24 hours of her life in an operating theatre, and her family thought they'd lost her five times.

When Maisie-Grace was just three weeks old, she had three procedures a week, putting a large needle into the top of her head to drain spinal fluid, and at six weeks old, she had a VP shunt fitted which drains all the fluid from the brain.

Shunts are man made and nobody knows how long they will work for which means more operations.

She has undergone 15 operations and as she gets older she will be having lots more.

Unfortunately, the NHS can not fund the right wheelchair that is needed, so Maisie-Grace's grandmother, Alison, is hoping to raise enough money to buy her granddaughter the wheelchair she needs.

This wheelchair will have the right support for her hips & spine, and it also grows with her and could last her till late teens.

Maisie-Grace will be able to go over rough terrain like walking through the woods and will be much easier to wheel over grass.

Also, when Maisie-Grace goes on holiday, she will finally be able to go in the sea as the wheelchair will be able to go across the sand.

When it’s snowing, Maisie-Grace is unable to go out in her wheelchair as we struggle to push it through the snow but with the new one she will be more mobile and be able to explore a lot more than she can now.

"This wheelchair is also 10kg lighter than the NHS one, she also has fallen out of her NHS chair twice before forwards and hurt herself," said Alison.

"She's really hoping that we can raise the funds to buy the new wheelchair and if she's lucky maybe a trike too."

A trike means Maisie-Grace would be able to go on bike rides with her friends and family.

"Maisie-Grace has to use her hands to wheel it around," added Alison.

"This would build up her body strength, as she dislocates her hips and is not allowed to use pedals.

"Hopefully in the next month the company will be out about the trike, but we've had quotes for a new wheelchair."

Maisie Grace's family have approached several charities but unfortunately due to COVID-19 may of those are closed for funding.

If you would like to donate any money to the cause, Alison has created a Gofundme - the link is here.