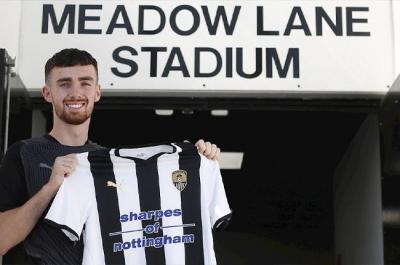 The magpies latest recruit arrives at Meadow Lane on a two-year-deal, after being released by League Two side Harrogate Town.

Francis is a former product of the Manchester City academy having signed his first deal with the Premier League club aged just six-years-old.

"He arrives here with great pedigree and experience of playing with some outstanding talent. He progressed through the ranks as a left-sided centre-back but felt, at around 6ft, he probably wasn’t quite tall enough to make it at the top in that role – hence his adaptation into a holding midfielder." He added.

"It’s the position Michael Doyle has played his entire career

"Doyler’s had a good look at him. He’s keen to work closely with Ed and I think he can add a lot to his game by passing on some of the smaller details. In the role we want Ed to play, you’re the pivot of the whole team."

Before further explaining: "You have to understand space, where to position yourself to receive the ball and the defensive areas to cover.

"You’re also responsible for dictating the play, so it’s a hugely important position.

"We feel Ed ticks all the boxes to do a great job for us. Positionally he’s very, very good, he’s comfortable on the ball and has a lovely left foot – as well as a good physical presence."