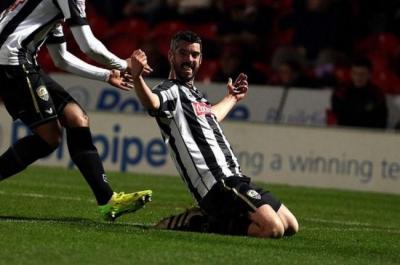 In addition, the defender believes that the Magpies’ impressive set-piece game is why they are soaring in League Two.

Duffy scored his third goal of the season in the 3-1 win at Colchester United at the weekend, giving them another priceless three points in their hunt to consolidate a top seven place.

“I’ve got three goals, and before I came here last season my goalscoring record was pretty dire really,” the Welshman told the Nottingham Post.

“I scored four last season and and added to what I’ve got this year it’s doubled the tally in my career. I am more than happy with that, although the gaffer will say he will want a few more.

“But (Shaun Brisley) has chipped in and so too have the full-backs. Goals from defenders are bonuses really and you can see that we work on it in training. If you put the ball in the box you’ve got a good chance of scoring.

“At the other end if you keep them out then it gets you up the league. We’ve not conceded too many goals from set-pieces and scored quite a few.

“If you did a league table on them I am sure we would be pretty high up. That’s why we are probably why we are so high up in the league.”