Shaun Brisley: 'I am enjoying my football at Notts County' 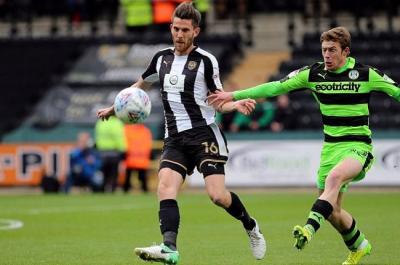 Shaun Brisley has admitted that he is thoroughly enjoying his time at Notts County and believes his decision to leave Carlisle United has been justified.

The 27-year-old left Brunton Park in the summer to join Kevin Nolan - with whom he worked at Leyton Orient - at Meadow Lane.

Brisley has established himself as a mainstay of the Notts defence, putting in impressive performances week in, week out and helping the Magpies to the upper echelons of League Two.

"It wasn't going to be an easy choice to leave Carlisle, who made the play-offs last season," Brisley told the official Notts website.

"But I had to come to a team who I thought would be pushing for promotion. Notts County was that team.

"I'm enjoying my football, which helps massively. I feel as though I have come in and done well but there is still plenty of room for improvement. I'm still working on my weaknesses to ensure I keep getting better.

"Richard (Duffy) and I have been playing to the best of our ability for most of the season so long may that continue.

"Part of the understanding we have between each other comes naturally and some of it comes from work on the training ground.

"We complement each other well. We both have different strengths and weaknesses, which even themselves out."