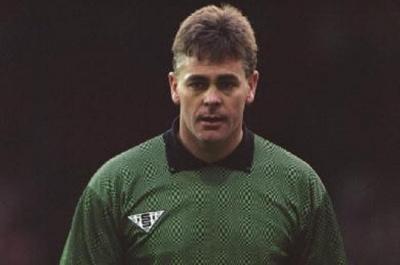 Every remarkable Notts County team over the years has comprised of quality players in every position of the pitch, and as arguably the most important one in any squad, the goalkeeper slot has also been filled by some great names at Meadow Lane.

From Albert Iremonger in the early 20th century to the likes of Kasper Schmeichel and Bartosz Bialkowski in the 2010s, via Jimmy Sirrel's protege Raddy Avramovic in the early 80s, every generation of Notts fans will fondly remember at least one quality name in between the sticks.

The man who occupied this role during County's last truly stellar period, in which they last graced the top flight, is Steve Cherry, a player and individual who remains loved by everyone involved with the Black and White Army.

Born on 5 August 1960 in Nottingham, Cherry started his career across the A52 at Derby County, signing schoolboy forms as a 15-year-old. Three years later he put pen to paper on a professional contract and made 77 appearances for the Rams between 1978 and 1984, also spending a short time on loan at Port Vale between 1980 and 1981. While at the Baseball Ground, he was voted the club's player of the year in 1983.

Cherry then enjoyed a two-year spell at Walsall, where he made 71 appearances, and Plymouth Argyle, where he played 73 times - and picked up the second player of the year award of his career, in 1988 - and while on the Pilgrims' books he also had a short stint on loan at Chesterfield.

In January 1989, a little-known manager by the name of Neil Warnock joined Notts County, and one month into his tenure, his new side lost 3-0 at Chesterfield, who had Cherry in goal. Just a week later, the Nottingham-born goalkeeper's registration was sold from Plymouth to Notts, whose goalkeeper at the time, Mick Leonard, went to Saltergate.

The fee to sign Cherry was £70,000, but Notts more than got their money's worth as the goalkeeper made the number 1 shirt his own, and his time at the club coincided with a meteoric rise through the leagues.

County narrowly missed out on the Third Division playoffs that year, but put it right the following season, finishing third and going all the way to the final, where Cherry kept a clean sheet in a 2-0 victory over Tranmere Rovers at Wembley which took them into the second tier.

The following year they repeated the feat, finishing fourth in the Second Division to qualify for the playoffs, and Cherry was once again impervious in goal as they saw off Brighton & Hove Albion 3-1 in their second trip to Wembley in just as many years.

1991 also saw arguably Cherry's greatest ever game, putting in what was deemed a "heroic performance in a 1-0 win over top-flight Manchester City in the fifth round of the FA Cup, a series of outstanding saves keeping the Citizens out as Gary Lund struck a winner for Notts late on.

Despite the 1991-92 season not going according to plan for Notts, with relegation back to the second tier after just one year in the First Division, Cherry nonetheless impressed in between the sticks, and was named as the club's player of the year that season for his efforts - the third of his career.

All in all, Cherry made 266 appearances for the Magpies - including two more games at Wembley, in the 1994 and 1995 Anglo-Italian Cup finals - by the time of his departure to Glenn Roeder's Watford in July 1995, where he made just four appearances as deputy to Kevin Miller before linking up with former club Plymouth, reuniting him with Warnock once again.

That season, Cherry helped the Pilgrims reach the Third Division playoffs, and much like his time at Notts, he would once again find himself on the winning side at Wembley as the Devon club won promotion with a 1-0 win over Darlington, Cherry keeping another clean sheet at England's national stadium.

The twilight of Cherry's professional career saw him turn out for Rotherham United and Rushden & Diamonds, before several brief non-contract spells at Mansfield Town, Stalybridge Celtic (on loan), Oldham Athletic, and Lincoln City.

He then made several appearances for a number of non-league sides - Kettering, Stalybridge Celtic, Kidsgrove Athletic and Belper Town - before officially hanging up his boots (and gloves).

Cherry went on to work for Lincoln and Macclesfield Town in a coaching capacity, but left the latter in May 2010 to undergo heart surgery, from which he thankfully recovered.

A man whose contributions for Notts County are worthy of a place in the club's hall of fame, Steve Cherry is a true Magpie legend.