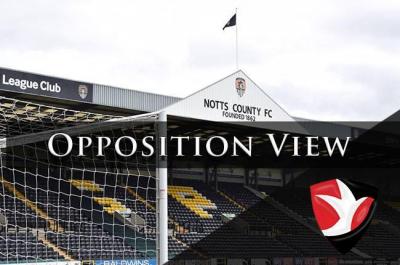 Here we are in mid-November and Notts County continue to hold top spot in League Two.

Up next for us is a home encounter with Cheltenham Town, who currently sit 16th in the table.

Ahead of the game at Meadow Lane, Pride of Nottingham spoke to Robins fan Dave to get an insight on this weekend's opposition.

About Dave: I've been a fan since 1995, and my favourite player is Scott Brown.

1) Cheltenham dropped out of the Football League in 2015 but came back up the following season with a 101-point haul in the National League. What went wrong in the relegation season and how was it put right so soon?

We survived narrowly in 2013-14, a season which followed two playoff position seasons and afterwards we lost key players, there were also managerial changes, and yeah, it was a case of a club in disarray going down. But the following season Gary Johnson signed a two-year deal, there was a squad clear out with good, hungry players brought in, and everything just clicked to get us back up.

2) Martin Allen, who's remembered fondly at Notts County, managed Cheltenham for a while - how did he do with you?

Allen managed the club during a very tumultuous time when we had money problems, narrowly avoiding administration and having to put all players up for sale, but he wasn't particularly good - we got relegated to League Two under him, had a bad spell and then he was put on gardening leave due to allegations of racism, of which he was formally cleared but ended up leaving by mutual consent. So that was that.

3) Cheltenham were drawn against Spurs in the third round of the FA Cup in 2012 - what cup memories do you have with your club?

Both that game against Spurs and the one against Everton were exciting ties but sadly we got hammered in both encounters. My favourite cup memory is actually the 97-98 FA Trophy win, completely different kettle of fish to today but still a very enjoyable occasion.

4) Who would you describe as Cheltenham's biggest footballing rivals?

Traditionally it's been Gloucester City, but given we're several leagues apart, the only time we'll get to meet is in the cups, like the Gloucestershire Senior Cup. In the League it's Forest Green Rovers.

5) Who are your team's danger men?

Carl Winchester is our midfield lynchpin, a nimble player who can pick a pass and has also weighed in with a couple goals. Mohamed Eisa, meanwhile, is a great finisher, has plenty of pace and has done well in front of goal.

I reckon a 1-1 draw, with Eisa getting our goal.