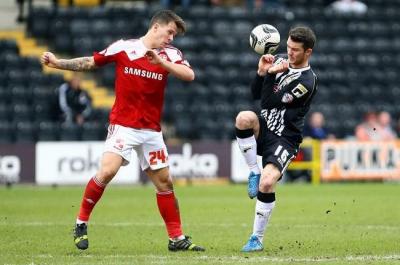 The festive period continues to bring forth football action as Notts County, fresh from a 4-1 win away at Morecambe on Boxing Day, prepare for two games in three days, starting with Swindon Town away.

The Robins sit a very modest 11th in the table with 35 points, putting them within reach of the playoffs.

Pride of Nottingham has spoken to Swindon fan Robert to get an insight on Saturday's opposition.

About Robert: I've been a Swindon fan since I was a kid, going back to the early 2000s, and my fave player is Sam Parkin.

1) Swindon finished fourth in League One in 2015 but were relegated into League Two two years later. What happened?

Tim Sherwood happened. He was appointed as "director of football" but he was in charge of "all football-related matters" including tactics and training, while at the same time Luke Williams was their head coach but had his hands tied. The whole thing was a farce and after relegation, he just left and said "this wasn't a job, I wasn't getting paid".

2) How do you think this season's gone so far for the Robins?

We've been woefully inconsistent. Superb on the road, dreadful at home. The best example is being able to beat Luton 3-0 on their own turf but get hammered 5-0 at the County Ground.

3) You currently sit 11th in the table, three points off the playoffs. Do you fancy yourselves for promotion?

It's very tight in mid-table at the moment and the playoffs are a massive scramble at the minute, but unless Swindon can improve their home form, they're not going to make the playoffs.

4) Ralf Little was reported to have had a trial with Swindon a few years ago, was he any good?

Feels like a few but it was about 12-13 years now? Time goes way too quick! But no, he wasn't taken on as Andy King said he wasn't good enough - that said, the rest of the team at the time wasn't much better... he's on the celeb football circuit though, doing charity games, so that's about his level which is no bad thing.

5) Who are your danger men?

Luke Norris is our top scorer with 9 in 18 games, he was superb in September but since then his form's tailed off a little, he's still getting the odd goal though and if the rest of the team puts in more of a shift, we'll hopefully see him back on form.

It's at home, cue collective groans from fans... but I'm not going to predict a loss for my team, so I'm saying 2-2, Norris and Woolery with ours.