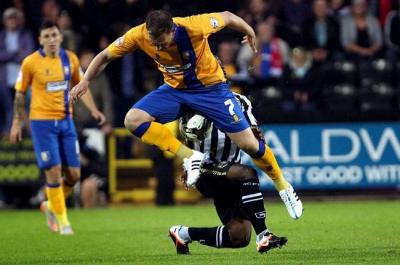 Notts County have met Mansfield Town 52 times over the years in the Nottinghamshire derby.

Notts haven’t won a Nottinghamshire derby in 13 years (Notts and Mansfield didn’t play each other in the league for 7 years between 2008 and 2015) and have lost on their last four visits to Field Mill for a league game.

Since the derby resumed from 2015-16 onwards, Mansfield are unbeaten against winning 4 times and drawing twice with an aggregate score of 14-3.

Mansfield are on a 12-game unbeaten run in League Two and have only lost once this season (a 2-1 home loss to Exeter). In that run, they have won 5 and drew 7.

Notts are winless in their last eight league games but with Neal Ardley now in charge, they hope the ex-Dons boss will steady the ship. In the eight-game winless run, Notts have drawn 4 and lost 4, scoring 6 and conceding 15.

Mansfield were elected to the football league in 1931.

Mansfield have the oldest professional football ground, currently in the football league.

The Stags were the first club to complete an entire season unbeaten at home in the 1950-51 season.

Jon Stead looks set to return to the starting line-up for Notts whilst fellow striker Kane Hemmings has trained this week.

Enzio Boldewijn and Lewis Alessandra will be out for a while with injuries picked up in November.

Matt Tootle is doubtful, and Ben Hall will be out long term after rolling his ankle earlier this week.

Alex MacDonald and Krystian Pearce may miss the game whilst CJ Hamilton played 45 minutes on Tuesday in the 1-0 Checkatrade Trophy loss to Bury.

David Mirfin has resumed training in the past few weeks.