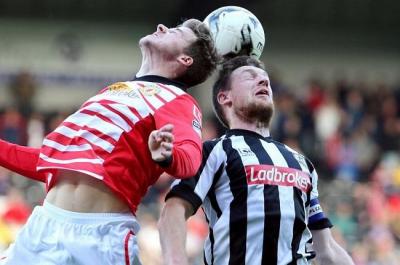 Notts County’s head-to-head history with Crewe Alexandra dates back to September 1893, when the Magpies faced the Railwaymen at the Alexandra Recreation Ground. The result was a 2-0 win for Notts.

After several further meetings in the late 1890s, the fixture would experience a hiatus of 63 years; between 1896 and 1959, the two teams didn't play each other.

Notts and Crewe have played 44 times in competitive games, and we have the upper hand with 21 wins to 14 defeats, while 9 draws have taken place.

In 2013, a 4-0 scoreline at Meadow Lane brought some light to a gloomy first half of the campaign.

Notts are unbeaten in their last six home league games against Crewe (three wins and three draws), finding the net at least once in all six matches (12 goals), since a 0-1 defeat in March 1997.

Crewe are unbeaten in their last three League Two clashes against the Magpies (one win and two draws), last going four without a defeat against them in all competitions in November 1966 (five games).

After a run of just one defeat in 23 league games at home, The Magpies have now lost back to back league matches on home soil for the first time since December 2016 (a run of 5).

The Railwaymen have lost each of their last three away games in League Two, and have lost 14 of their last 17 league games on the road (W3) in a run stretching back to April 2017.

Crewe Alexandra have lost a league-high 20 points from winning positions in League Two so far this season, whilst also claiming a league-low one point from losing positions in the competition this campaign.

The origins of the “Alexandra” moniker in the club name aren’t fully known.

Whether they took the name from a hotel, patronised by those connected with the railway works and where they held their meetings, or whether it was after Princess Alexandra of Denmark, who married Queen Victoria’s eldest son, later King Edward VII, is open to speculation.

In 2013, the club won its first-ever major silverware after beating Southend United 2-0 in the Johnstones Paint Trophy final at Wembley.

Crewe are known as the Railwaymen because of the town’s links to the British train network. Crewe station was completed in 1837 and is one of the most historic railway stations in the world.

Nowadays, as well as serving the town of Crewe that has grown near it, it still operates as a major junction on the West Coast Main Line (WCML).

It also serves as a major station on the WCML and as a major rail gateway for the North West.

Notts have forward Mason Bennett and defender Ben Hall to call upon, the pair having joined the club on loan from Derby County and Brighton respectively on transfer deadline day.

Midfielder Matty Virtue is available once more after serving a one-game ban but goalkeeper Ross Fitzsimons remains sidelined for another two matches for his straight red against Crawley.

Crewe could hand a debut to defender Jamie Sterry, who joined on loan from Newcastle on deadline day.

David Artell's defensive options have however taken a hit as Zoumana Bakayogo misses out through suspension.

Fellow defender Michael Raynes faces a fitness test, as does goalkeeper Dave Richards after he was forced off in the Swindon loss with a calf problem.

Share your thoughts about this Stat Attack preview on Pride of Nottingham by signing up to the website, visiting the forum and joining in the chat with hundreds of fellow Notts County fans.