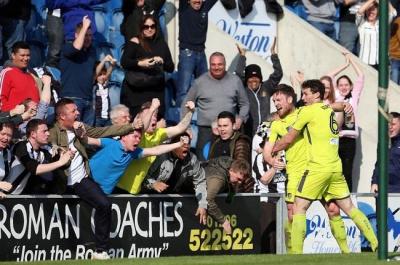 Notts County came from a goal down to record a 3-1 win at Colchester United that keeps their League Two playoff hopes alive and kicking.

The Magpies endured a poor first half, falling behind on nine minutes when Drey Wright exchanged passes with Ben Stevenson, slicing through the visitors' defence, before slotting low past Adam Collin from close range.

In the 17th minute, Colchester came close again when Mikael Mandron picked up Ben Stevenson’s smart pass and ran at the visitors’ defence before drilling a low shot straight at Collin.

Kane Vincent-Young, Wright and Mandron all weighed in with efforts against Notts, who had Jonathan Forte's goal ruled out on 25 minutes for a push by Shaun Brisley on Luke Prosser following a corner.

The U's almost doubled their lead just after the break when Tom Eastman divered Mandron's header onto the foot of the post.

Three minutes later, Notts dragged themselves level when Forte squeezed a low shot past Sam Walker after Shaun Brisley had done well to keep the ball alive from Tootle’s cross.

Ameobi then fired the visitors into the lead with 21 minutes remaining, finishing off after Forte and Matty Virtue tested the opposition keeper.

The game was then killed off with 14 minutes remaining when Richard Duffy rose to head home Dan Jones's free kick into the area.