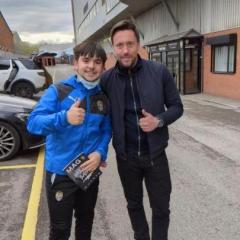 Notts county update — can they chase for promotion?

Notts County have had an excellent start to the season with an unbeaten start from the opening seven matches, with four wins and three draws.

From a perfect performance against Barnet, where the Magpies came out on top by putting five past the bees who didn’t manage to find the back of the net.

Semi-new Magpie boss Ian Burchnall has become a massive fan favourite by taking ‘County’ to the semi-finals of the national League play-offs last season and leading Notts County to a near - perfect start so far!

The flying high Magpies didn’t have it entirely their way in the first home match of the season after falling behind early in the game due to miscommunication between Sam Slocombe and Connell Rawlinson.

Later on, in the match, the big man’ Kyle Wootton scored a brilliant diving header to find the back of the net.

With the match ending one a piece, the Magpie fans felt they should have taken all three points.

In nearly all matches for Notts County this season, the six - foot one forward has found the back of the net.

Kyle Wootton originally joined Notts County on loan from Scunthorpe United back in 2019 before making It a permanent move in 2020 for a small fee of £60,000.

Every season playing in the famous black and white jersey, Kyle Wootton has finished as the top goal scorer for the club.

What does the future hold for Notts County?

With the Notts County owners Christoffer and Alexander Reedtz being so honest, smart and incredibly responsible, the future does look good for the famous Notts County.

Since the arrival of the new owners, the club has been well run and has had a massive turn around since the last owner, Alan Hardy, who put the Nottingham side up for sale after posting a picture of his genitalia on Twitter.

The Reedtz brothers have set a 5-year plan out and the Magpies have one goal this year, promotion.

Join the Pride of Nottingham in discuss what role you see Lewis Knight fulfilling in the upcoming season.