Match Report: Notts County come from behind to see off Bristol Rovers in FA Cup 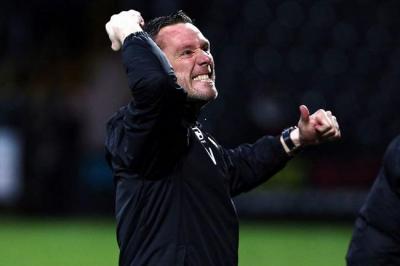 Notts County are in the hat for the second round of the FA Cup after coming from two goals down to clinch a stunning 4-2 win over Bristol Rovers in Friday night's first-round clash at Meadow Lane.

The game was frantic from the off, with Rory Gaffney rifling just wide in the second minute and, at the other end, Jorge Grant's free kick was hooked over the bar by Terry Hawkridge four minutes later.

In the eighth minute, some dire Magpies defending helped Rovers edge into the lead as Joe Partington's cross from the right fell into the path of the unmarked Liam Sercombe, who nodded home from close range.

And four minutes later, more substandard work from the Notts backline meant that a corner from Chris Lines found Stuart Sinclair unmarked in the six-yard box to plant a header beyond the reach of Ross Fitzsimons.

Credit to the hosts, they quickly found gear after the double setback and, just before the half-hour mark, halved the deficit through Ryan Yates, who made the most of some lacklustre Rovers defending to nod Carl Dickinson's free kick into the back of the net.

Just two minutes later, the Black and White Army at Meadow Lane was sent into a frenzy as Yates struck again, turning home another great Dickinson set piece delivery against the League One side.

Rovers were lucky to get to half time level as Kevin Nolan's side looked threatening every time they went forward.

On 39 minutes Jon Stead was bundled to the ground but nothing way given by the referee, while a Shola Ameobi backheel into the path of Hawkridge was drilled wide.

Both sides gave as good as they got early in the second half as Tom Nichols and Gaffney tested Fitzsimons, while Grant curled an effort just over the bar, but by this point Notts were getting in an even higher gear.

Just before the hour, the tie was turned around in County's favour thanks to a clipped pass from Dickinson finding Grant, who crossed into the box where Stead was on hand to sidefoot the ball beyond Adam Smith.

The action came thick and fast as Notts continued to put in a superb team performance, with Rovers keeper Smith being tested on several more occasions, but Grant added the cherry on top in injury time for the hosts as he went clear through on goal after latching onto Hawkridge's headed flick on, before slotting underneath Smith to send Meadow Lane barmy.