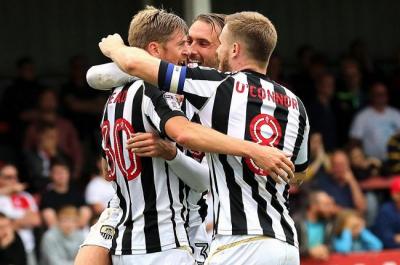 The Alan Hardy and Kevin Nolan renaissance continues as Notts County put in a gutsy performance at Leyton Orient and, despite being pegged back, persevered and claimed a 3-2 win at Brisbane Road to gain further ground from the League Two relegation zone.

Orient were already without Liam Kelly, who was banned for six games after pushing a Plymouth Argyle ballboy earlier in the week, and suffered a further setback when defender Tom Parkes was stretchered off with only eight minutes on the clock.

The Magpies broke the deadlock in the 35th minute when Teddy Mezague failed to deal with a long goal kick from Adam Collin and Jorge Grant poked the ball past Sam Sargeant.

Notts then went 2-0 up within three minutes of the beginning of the second half after Jon Stead beat Sargeant in the box and his touch went in off the bar.

The O's, however, reduced the deficit within a minute when McCallum headed home after Nigel Atangana's header had struck the crossbar.

Danny Webb's charges were back then on level terms when Mezague unleashed a powerful volley into the net from outside the penalty area with 10 minutes left.

It was Notts who had the final word when, with six minutes left in the game, Marc Bola sent in a cross from the left and Stead drove the ball into the net to seal all three points.

Share your thoughts about the game on Pride of Nottingham by signing up to the website, visiting the forum and joining the conversation.