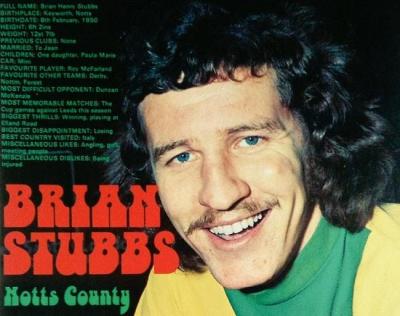 The one-club man. Uncommon even in the olden days, such an entity is now rarer than a unicorn. Though there have been some in recent years - Jamie Carragher, Francesco Totti - they are a dying breed, although you do get some who spend 99 percent of their pro career at one club and then have one final payday elsewhere - nobody could begrudge Steven Gerrard his swansong at LA Galaxy, for example.

One example of a fully-fledged bona fide one-club man at Notts County is Brian Stubbs. Born on 8 February 1950 in Keyworth, he is a prodigal son of Nottingham who, despite his impressive performances and illustrious career, was never swayed by a move away from Meadow Lane.

Stubbs was a student at the illustrious sporting institution of Loughborough University in the late 60s and was impressing for their football team when, during the 1967/68 season he was offered a trial by Nottingham Forest.

However, this was not to be his step into the professional game - he waited one more year before penning a deal with Notts County, under the then manager Billy Gray - who departed soon after to be replaced by caretaker manager Jack Wheeler.

Stubbs made his debut at inside-right for the Magpies, who were toiling in the Fourth Division at the time, but given his power, toughness and determination, he was soon converted to a central defender, which as the years went on, turned out to be a stroke of genius.

He made just two appearances in 1968/69 as Notts finished 19th in the table, just three points clear of the bottom four, but there was a storm - of a good kind - brewing at the club, because as we all know, the 1969/70 season would herald the arrival of a certain Scottish manager by the name of Jimmy Sirrel.

As the Swinging Sixties rolled to an end, Stubbs revelled in his new role in defence and, with the Glaswegian taking the helm in November 1969, the 19-year-old made 35 appearances as Notts entered the summer of 1970 with a much-improved seventh-placed finish in the fourth tier.

Sirrel's impressive work truly came to fruition the following season, when the Magpies became champions of the Fourth division, finishing nine points clear of runners-up Bournemouth, and Stubbs had by this point developed into such a quality defender that he was voted Player of the Year.

Stubbs had developed an impressive centre-back partnership with David Needham, who was at the club between 1965 and 1977, and despite other clubs sniffing around Stubbsy, he was never persuaded to leave Meadow Lane, as third division status became second division status and, following eight years in the second tier, the dream had finally been accomplished - Notts became a top tier club in 1981.

Sadly, it would seem that Stubbs never did get the chance to turn out in the First Division - According to David McVay in Steak Diana Ross II, "he was denied his moment of glory and an appearance in the top flight by the management duo who refused to pick him despite his outstanding service."

Stubbs made 426 league appearances in total for Notts, scoring 21 goals and played for eleven years at the club, his entire professional career, and to this day he is still welcomed back with open arms at Meadow Lane.

According to The League Paper, Stubbs still lives in his native Keyworth and "worked in the building industry and before becoming a painter and decorator until his ­retirement", and, back to McVay's book, "still socialises and throws the odd dart in public houses south of the River Trent".