Match Report: Notts County back on track with victory over Stevenage 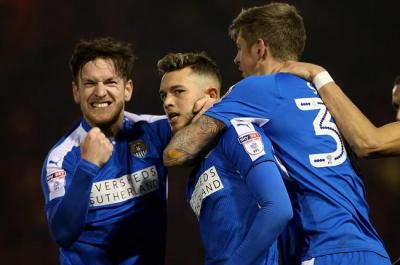 Notts County have claimed a much-needed three points in a 2-0 win over Stevenage in Saturday's League Two encounter at Meadow Lane.

Jorge Grant came off the bench to open the scoring on 77 minutes, with Shola Ameobi adding a second three minutes later to make sure of victory.

The opening stages of the game brought about opportunities for both sides as Luke Amos bundled the ball into the side netting and Ben Hall sent an effort over the Boro bar.

Ben Kennedy and John Goddard then tested Adam Collin with tentative chances, while at the other end Elliott Hewitt headed over from Terry Hawkridge's delivery.

Neither side could find the breakthrough by the half-time mark, despite Jonathan Smith's shot which went wide, another Goddard effort, and Jon Stead volleying off target from Matt Tootle's cross.

The second half brought about more incisive play from Notts as Stead, Hawkridge and Carl Dickinson weighed in with chances.

Smith then spurned a good opportunity for Stevenage when he was well placed in front of goal but sent a volley straight at Collin, while at the other end Hawkridge's over-hit cross had to be palmed over by Tom King.

Finally the breakthrough came 13 minutes from the end as Grant struck a superb volley into the bottom corner of the net after Stevenage had struggled to deal with Richard Duffy's ball into the box.

And three minutes later came the clincher as Ameobi bravely prodded in a header from Hall, getting a knock for his troubles although he was fine to continue.

The result sees the Magpies climb to fourth in the table and narrow the gap between themselves and third-placed Wycombe Wanderers to one point, though the top three all have a game in hand.