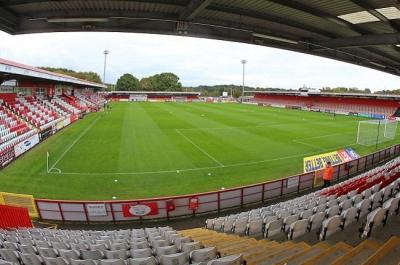 Notts County have come from behind to claim a 1-1 draw at Stevenage but were unlucky not to get all three points in Saturday's League Two encounter at Broadhall Way.

Having made widescale changes in the midweek defeat to Lincoln City in the EFL Trophy, Kevin Nolan reinstated all but one of the players who took part in the 4-2 win over Bristol Rovers in the FA Cup.

The only change in the starting XI from last Friday's game was Shola Ameobi, who was omitted from the squad altogether, Lewis Alessandra taking his place.

Notts were first to apply the pressure in the game, but the Stevenage defence stood firm as Ryan Yates fired an effort from range that was charged down.

Stevenage countered through Tom Pett, who blasted over from range, and Danny Newton, who saw his looping header crash off the crossbar after a delivery from Joe Martin out wide.

The hosts continued to have the better of proceedings and went on to break the deadlock on 40 minutes when the dangerous Danny Newton fired home from 10 yards out after Notts failed to clear their lines following a free kick.

Jorge Grant came close to levelling on the stroke of half time from a free kick after Ryan Yates was clattered just outside Stevenage's area, but the ball went over after skimming the crossbar.

The restart saw Darren Sarll's side continue to threaten and Ross Fitzsimons had to be alert to keep out an effort at his near post after Newton had been played into the area with a dangerous ball over the top.

However, Notts soon upped their game and weighed in with key chances of their own, Jorge Grant coming close on two occasions in quick succession.

Eventually Kevin Nolan's charges found the equaliser and Grant played a key role, pouncing on a loose ball to charge down the left-hand side before cutting the ball back into the centre, where Elliott Hewitt claimed and slotted home.

From then on it was mostly one-way traffic as Yates, Grant, Jon Stead and Terry Hawkridge all came close to getting that crucial second goal, but ultimately the hosts held on for a share of the spoils.