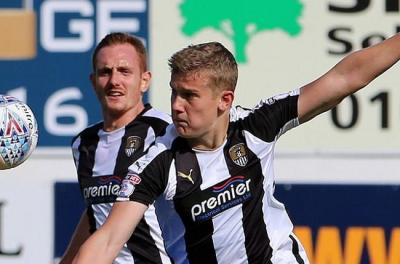 Notts County have returned to winning ways and sit atop League Two once again following Saturday's 2-1 win over Barnet at Meadow Lane.

The Magpies had slipped into a mini-blip prior to this weekend, with a defeat at Mansfield Town and a poor home draw with Forest Green Rovers sending alarm bells ringing ever so slightly.

However, Shola Ameobi's header on the quarter-hour mark and Ryan Yates's equivalent from Matt Tootle's pinpoint cross set Notts on their way, even if it proved a nervy ending with Simeon Akinola's late deficit-halver.

Kevin Nolan's charges started brightly and threatened in the seventh minute when Carl Dickinson's cross fell to Richard Duffy at point-blank range, but a Bees defender got in the way of the ensuing strike.

Notts didn't have to wait long to take the lead as Ameobi headed a Rob Milsom corner towards goal and Shaun Brisley forced the ball home in the 16th minute.

The remainder of the opening 45 minutes saw little action, with the only incident of note involding Adam Collin, who collided with an opposition player mid-air, but he was fine to continue and came out for the second half.

The Notts keeper had to be alert to keep out a deflected Barnet effort, backpedalling to push it over the bar and out.

Soon enough, the hosts were two goals to the good, as Tootle Cruyff-turned his man and sent a cross into the box, where Yates was on hand to nod home for his second of the season and first in the league.

Eventually, Collin's first-half injury left him unable to continue, so Ross Fitzsimons came on just before the hour mark in between the Magpie sticks.

At the other end, Lewis Alessandra burst into the Bees box and rifled an effort towards goal, only for Craig Ross to pull off a smart save, before Jorge Grant blasted over from six yards.

Notts thought they had claimed a third goal when Stead drilled home at the back post, only for the referee's assistant to flag for offside.

Barnet subsequently stepped their game up and forced Fitzsimons into several smart saves before Akinola struck back in the 81st minute with a powerful shot into the bottom corner.

However, the Magpies managed to withstand a nervy finale and the full-time whistle saw them clinch all three points.