Match Reaction: 'Whatever happens in playoffs, Notts County have had a great season' 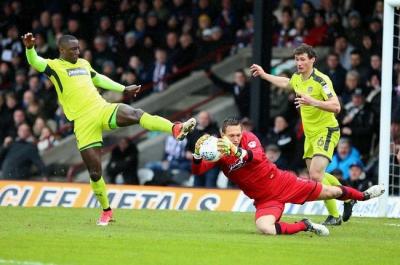 Notts County threw away the chance of making the top three in League Two with one game to spare after falling to a 2-1 defeat at Grimsby Town on Saturday afternoon.

The Magpies laboured at Blundell Park and fell behind through Nathan Clarke's first-half strike.

Kevin Nolan's side then looked to have secured a point as Dan Jones stabbed home with only a minute left on the clock.

However, the Mariners were not to be denied and substitute Jamille Matt headed a winner in the third of five added minutes to slam the door firmly shut on County's top-three ambitions.

With third-placed Wycombe Wanderers winning at Chesterfield, it meant that the Chairboys won automatic promotion to League One alongside champions Accrington Stanley and second-placed Luton Town.

How did the Notts contingent react to the defeat? Pride of Nottingham takes a closer look.

"We huffed and puffed all day but didn't really put them under enough pressure.

"We didn't use our game plan effectively enough and deserved what we got.

"But I've been proud of the players all season long - they've been fantastic.

"It would have been lovely going into the last game of the season with half a chance of being promoted, but we've had a fantastic 17 months."

Chris: I've been told that it's been a very disappointing result, however inconsistency can creep into play and this is what I am going to label it down too. I'm not disappointed at this stage about missing out on the autos, I'm looking forward to seeing how things pan out in the coming weeks. Grimsby are a fighting team, they're a side very capable of matching or even out playing any side on the day. Just hope we can start to find some sort of consistency going into the playoffs, as we will need it - I do think form goes out the window there too.

Fan of Big Tone: I’ve got to say I was disappointed, nay gutted, I was hoping it would go down to the last match and we creep into the automatics but isn’t it great to have an exciting end to the season for a change? Whatever happens it’s been a great season.

David Pratt: Did say a few weeks ago Wembley here we come

Martyn Coyle: On to the playoffs, great 1st full season in the Hardy era COYP!

Lewis Jackson: The referee today was by far the worst I've seen all season, and I've seen some really poor refs, but however the team simply wasn't good enough today too many sloppy passes and negative football.. Liam noble worst player on the pitch

Rosemary Sanders: Done well this season but not well enough . Do the players really want Division one ??

Adam Bonkers Bird: Shitty ref strikes again. Carl Boyeson is an absolute nob, who ruined our match against Stanley last August when we were 2 goals up. Two stonewall pennos today could have won us this game. These bad refereeing decisions have cost us quite a number of times this season.

Dave Woolley: How frustrating a team this is... lost away to all the bottom 3 clubs ( and to those who slated me for not being positive, well I don’t like to say I told you so; but I did). Yes ok a decent season overall but we don’t have enough bottle to win the playoffs.Just hope next season isn’t “after the Lord Mayors show and we struggle again !

Steve Blyth: Let’s hope the play offs are not on TV otherwise we are stuffed !

David Warren: On way home now on supporters coach and if we play like that Wembley just a dream

Sam Lock: Disappointing, but would have taken play offs at the start of the season.We're a flawed team that play well on our day, but so are all the other play off teams. I'm excited to see how we get

Stephen Greenfield: It appears that the negativity of some of the people making comments spreads like a bad apple through a barrel  . So sad , it’s all to play for. , let’s hope these negative people keep well clear of the ground where their presence may contaminate the whole stadium ! .

Lee Atkins: May be the players want the play offs and were saving them selves? Thats how im thinking anyway

Nigel Trueman: If we stay in League 2 expect a more difficult season.  A lot of players either need to leave or will leave.  recruitment is harder in League 2 and the team need time to gel

Scott Jones: Coventry aren’t anything special an Lincoln ain’t that great either

John Webster: We cannot afford to go up it’s the usual excuse

Mariusz Cwiklinski: Looking at the table, I've got to admit we've had a better season than most of us expected. We'll done Notts! Now we've got to start building for a new season, recognise our weaknesses and cover them asap, COYP's.

Carl Alvey: Better season than the last one

Nick Emmerson: And now to lose In playoffs. Not good enough to win. Cov or Lincoln will win it

Jay Dalton: I'm gutted for the automatic dream but hey we are in the playoffs the dream of Wembley is still alive

Brian Mawby: We won’t be going up not enough passion in this team. Too many defeats against bottom teams we should have been up already but anyway COYP

Shannon Smeed: At least we are in the playoffs COYP

Barry Bazza Hallam: What will be will be !!!