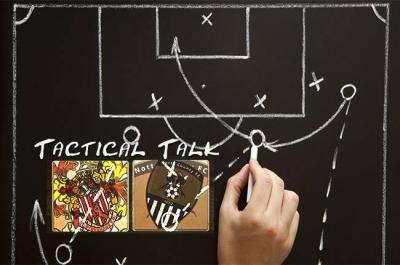 Notts County have been held to a 1-1 draw against Stevenage in Saturday's League Two encounter at Broadhall Way.

Danny Newton gave the hosts the lead seven minutes before the break, but Elliott Hewitt hit back for the Magpies before the hour.

Boro found themselves under pressure and had to dig deep to ensure they could hang on to a point come the final whistle.

In this Article, PON's Chris looks at how both sides played from an analytical and tactical level.

I think the result was spot on, both teams could have claimed victory but ultimately each side cancelled the other out. Whilst both clubs have suggested that they are deserving of the win, I think neither side captured the full 90 minutes and this makes the draw very fair in my opinion.

Stevenage made it very difficult for Notts within the first half, however our own problems at the back meant we struggled to assert ourselves properly and this played straight into their hands. In the second half Notts were much brighter and the confidence throughout lifted, it’s one of those Jackal type performances which needed better application within the whole game but the second half was pleasing. The draw came through hard-work more than anything, but it was a much improved second half for the Magpies.

How did Stevenage play?

As expected, they allowed their midfield and defence to break the game up. Whilst from a creative point of view their strikers never seemed out of ideas, they threatened throughout the game and had created some very good chances which should have been converted in the first half. That said, Stevenage were very physical and at times quite thuggish but they played well.

The issues weren’t so much tactical in the first half; it was more of a case of application on behalf of certain players. We invited the play and in turn this added pressure, but tactically we were fine – a few chances during the break on how to improve and more effort meant the tactics worked out well. Notts just needed to figure this out within the first half, as it could have been a different story had we have played how we did in the second half sooner.

I felt he protected Stevenage more so than Notts, however he wasn’t the worst official to referee a League Two game – yet he did seem to have an home team advantage and it was equally frustrating to see fouls on our players ignored only for a softer incident to be awarded to Stevenage.

Cheltenham Town – I keep seeing fans mentioning how we have ‘winnable’ games within this month, and yes this game is one I would usually have in favour for Notts but the way I see things is that any game is one we could win. The Robins are like Stevenage, they’ll make it difficult for us and as such we need to be ready to play them and of course work harder on the field.

I think if we play well the pressure will be off us, as the defenders don’t have a Matty Godden type player to deal with. We have to be confident from the off and practical within our thinking, how Notts attacks the game will be largely make things easier – as in control we will be able to keep the ball on the ground and move it wisely.

This is going to be important again, as likewise with Stevenage – Cheltenham know exactly how to play route on football. Nobody should underestimate their ability to play good football as their recent draw to Luton Town will highlight, yet there is an inconsistency to their performance and as such it’s one of those cases will they be up for it or won’t they?

I would suggest with us being top of the league at this stage it would be enough to say that they will be up for it, in which case Notts needs to be prepared and ready to highlight just how deserving we are to be in this position.

Another draw for me would be disappointing, yet if both teams play well for both halves’ I couldn’t complain – let’s just try to focus on playing solid football.

Danny da Bass: A fair result in the end I think. Good 1st half and resilient 2nd. Smiths error was a blow but would have taken a point against the top team before the game on the back of a dire run. I though King was emence and Pett had a reasonable shift. I was happy with the back 4 line up and thought this was to nullify their physical frontline. TVC is the better CB but perhaps a little inexperienced and not so physical. Wilkes could have cost us a pen. Overall happy.

Tucks: I'd have taken it before the game. On the balance of the play I'd say they edged it but not by much so probably a fair result. Rankles a bit that we conceded from such a silly error. Poor pass back from Smith and Wilko didn't looked very interested in busting a gut to get to the ball (that may be my rose tints because I don't particularly rate Wilko mind). We're still in touching distance of the play-offs and we've taken a point off the side on top of the table at present so it could be worse.

Peanut: Agree that it's a good point but unless putting in a shift means running around looking lost and giving the ball away on the rare occasion you've actually shown for it, then Pett didn't have a good game