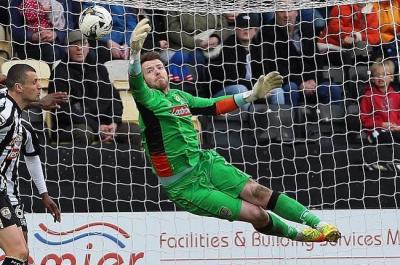 Kevin Nolan has confirmed that Adam Collin will miss Notts County's trip to Crewe Alexandra on Tuesday and will be sent for a scan a knee injury.

The Magpies goalkeeper suffered a blow in the first half of the 2-1 win over Barnet and despite toughing it out for a while, ended up having to be taken off.

Ross Fitzsimons came on in Collin's place at Meadow Lane on Saturday and is likely to line up between the sticks at Gresty Road, though Branislav Pindroch could also be considered.

“Unfortunately Adam won’t make the game against Crewe because he has had a nasty bang on his knee,” Nolan told the Nottingham Post.

"We are just hoping that it is a bit of bone bruising and that he will be available for the weekend, but Tuesday has just come too soon.

“He is going for a scan, which will give us a bit more knowledge of what is going on in his knee.

“But we have two understudies who have been pushing him to the limit, which is why I think you’ve seen Adam in the form he is in.

“He’s been fantastic for us, but now it’s up to one of the other two to come in and claim his spot and keep his spot.”