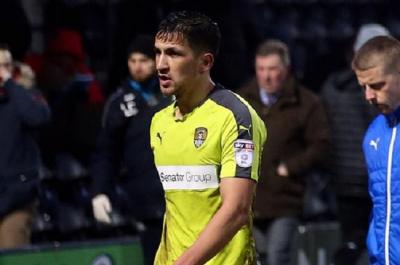 Notts County midfielder Noor Husin has picked up the February award for League Two Goal of the Month.

The goal in question was the equaliser in County's 4-1 win over Crewe Alexandra on February 3.

It saw the 21-year-old pick up the ball outside the box after a free kick had been poorly headed clear, before rifling home a superb long-range effort into the top-right corner.

Husin, who beat Swindon Town's Matt Taylor and Cheltenham Town's Joe Morrell to the gong, was presented with the award at his club's training ground.

"It's a good individual prize to win," he said. "I was up against some good goals so I'm delighted to win it.

"I thought I would just try and hit it and keep it on target. Luckily it flew in the top corner!"

The winners of the Sky EFL Goals of the Month are chosen by a fan poll on the Sky Sports website, with Pride of Nottingham sharing the link on its forum and on its social media pages, urging fans to vote.

🚀 | Congratulations to @noordinho10, who has been nominated for February's @EFL @SkyBetLeagueTwo Goal of the Month award for his 30-yard screamer against Crewe!

The shortlist for the poll is decided by a judging panel following suggestions from supporters via Twitter.