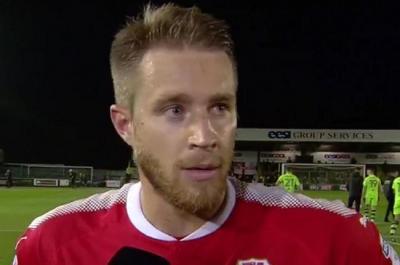 Swindon Town captain Olly Lancashire has expressed his confidence in getting a result against Notts County.

The League Two fixture at the County Ground is the reverse of that at Meadow Lane on September 12, when Jon Stead's penalty sealed a 1-0 win for the Magpies.

The Robins go into Saturday's game on the back of a heavy 5-0 home loss to Luton Town but Lancashire is convinced his side will "go out fighting" against Notts.

"We've played against Notts County before this season, it was a close game and we lost to a penalty in the end," he told the official Swindon site. "We've got to approach it as a new game.

"We've been in all week and we've been working on a game-plan to try and get a result. We're confident of doing that.

"I remember four weeks ago we were top of the form table and everyone was buzzing after seven wins in eight games.

"Football is full of highs and lows and you've got to take it - we're feeling it in there.

"You can either sit down and feel sorry for yourself or you can go out fighting and we'll certainly be fighting.

"We've got 35 points at the halfway point of the season, it isn't a terrible position to be in and we're ready to attack the second-half of the season and try to get into the promotion positions."