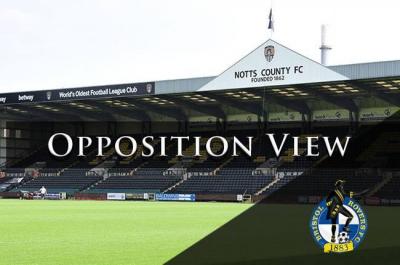 Notts County's League Two campaign will be put on ice this weekend as the FA Cup rolls into town, or more precisely, Bristol Rovers, who stand between the Magpies and the second round of the competition.

With all lower-league eyes firmly on the third round and the possibility of a fixture against a big Premier League side, Notts and Rovers - currently in League One - will want to get their names in the hat for the lottery.

In this Opposition View article, Pride of Nottingham spoke to Rovers fan Gary to get an insight on the opposition.

About Gary: In my 30s, been a Gashead since 1992, and my favourite player is Lee Brown.

Rovers dropped into the Conference in 2014 then enjoyed back to back promotions and now play in League One. What was behind this fall and subsequent rise?

Relegation was a bit of a (im) perfect storm that season. The board withholding funds for players with a view to funding a new stadium, one of the two January arrivals suffering a season-ending injury, John-Joe O'Toole's goal drought and of course that dreadful last day. Keeping faith in Darrell Clarke was key - he rebuilt the team following relegation, and he repaid the faith with a solid, well-drilled and talented squad, hence the back to back promotions.

What's your rivalry with Bristol City like, and what other teams do you consider as rivals?

Oh, we hate City. It's a pretty strong rivalry, and especially with how their owners have created the "Bristol Sport" brand, with the intention of monopolising sport in the city and shutting us out, it's disrespectful towards us, so yeah, a lot of bad blood.

Bristol Rugby played at the Memorial Stadium for a number of years, and rugby is big in that region - are a lot of Gasheads supporters of both?

Not since they became part of the Bristol "Sport" umbrella, they now play at Ashton Gate and virtually none of us want anything to do with them. Most Rovers fans will follow Bath Rugby if they're into the egg-chasing.

Rovers played in Bath for a number of years in the 80s and 90s - what's the current stadium situation like for the club?

A mess, in all honesty. We had been in talks with the University of West of England over a new stadium but, given the amount of things they wanted control over - security, external event revenue - it wouldn't have been good for us, so we broke off talks, and we're now looking at reveloping the Mem.

Who are your danger men?

Billy Bodin was our top goalscorer last season with 13 goals and this season he has nine in 15 games - and he plays as a winger! Up front, Ellis Harrison and Rory Gaffney have been in impressive goalscoring form, while summer signing Tom Nichols finally got off the mark in our last game.

2-1 Rovers, Nichols and Gaffney with our goals and onto the second round we go!