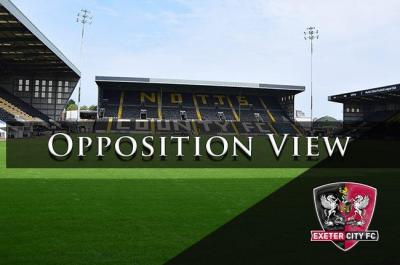 Notts County are back in League Two action this weekend with a home game against one of League Two's trickier propositions, Exeter City.

The Grecians topped the table earlier in the season and remain well in promotion contention as they sit fifth in the table.

Pride of Nottingham has spoken to Exeter fan Matt to get an insight on Saturday's opposition.

About Matt: I'm 27 years old, been supporting the team as far back as I can remember, and my favourite player is Richard Logan.

How have Exeter City done so far this season?

On the whole it's been fantastic, we picked up from where we left off last season and went top of the table and even though our form has gone a bit wobbly - mostly due to the poor away form - we're still just a point off third place, so it's all up for grabs!

Definitely. From bottom of the table in November 2016 to a playoff place and a trip to Wembley, obviously it was a massive shame not being able to get the job done against Blackpool but having picked up from where we left off, it's a great platform and we hope 2018 can see Exeter finally go up!

Who has been your standout player this season?

Jayden Stockley, our record signing, has had a brilliant campaign so far, with 13 goals in all competitions. Apart from being a clinical finisher, he's also able to pull off stunning pieces of skill, like when he flicked the ball over that Morecambe defender before scoring in our 4-1 win a couple months ago.

What's your favourite memory as an Exeter fan?

The 1-0 win at Rotherham on the last day of the 2008-09 season, which gave us our second successive promotion - from non-league to League One in two years. What an amazing day that was!

Where do you think you'll finish this season?

If we can sort out our away jitters and keep on performing and getting results at home, there's no reason why we can't finish in the top three. Even Luton and Notts, who seemed like they were shoe-ins for 1st and 2nd, are beatable on their day, so there's bound to be a lot more twists and turns this season.

I'll go for 2-2. Grant is probably the best player in League Two so he could get one or two for you, but Holmes and Stockley to get ours.

Share your thoughts about this opposition view article on Pride of Nottingham by signing up to the website, visiting the forum and joining in the chat with hundreds of fellow Notts County fans.