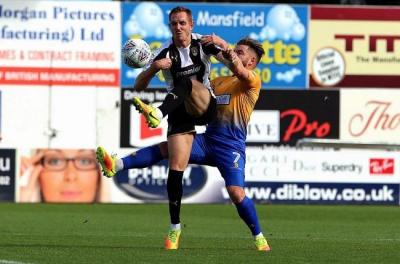 The first fixture between Notts County and Mansfield Town was in October 1937, a 2-0 win for the Magpies in Division Three (South).

County's record over the last 10 meetings, however, is poor, standing at two wins, six defeats, and two draws.

This record is embellished by the fact Notts have beaten Mansfield twice in the Johnstone's Paint Trophy in the last two years.

In reality, the Magpies haven't got a league win over the Stags since August 2005.

The Magpies have already lost twice to Mansfield this season (once in a league game, once in a EFL Trophy game), last losing three matches to an opponent in a single season in 2002/03 against Wigan Athletic.

Mansfield's last three league games have all finished 1-1, with the Stags taking the lead on each occasion.

Mansfield won the Football League Trophy in 1987, in their first game at Wembley Stadium.

After a 1–1 draw with Bristol City, they won the cup 5–4 in the deciding penalty shootout, thanks to Kevin Hitchcock saving two penalties.

That remains the only cup win in their history, though they did win the Division Four title in 1974-75, Division Three two seasons later, and the Conference in 2012-13.

However, the gaffer could also be tempted to restore Matty Virtue to his starting line-up in place of winger Terry Hawkridge.

New Mansfield boss David Flitcroft could be forced to reshuffle his side as they look to bounce back from last week's draw with Colchester United.

Captain Zander Diamond was forced off with a hamstring injury while Jacob Mellis suffered a knock to his ankle in the same game.

However, neither injury is as bad as was first feared and Flitcroft hopes both players could be available for the derby.

Will Atkinson and Paul Digby are among those pushing to start after coming off the bench last week.