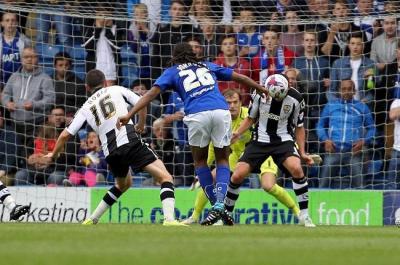 Notts County have played Chesterfield a total of 67 times over the years.

The first meeting came on 29 November 1930 in the FA Cup at the Spireites' old ground, Saltergate, and finished 2-1 to the Magpies.

The head-to-head record favours Notts, with 28 victories, 20 defeats and 19 draws.

The last time the two teams met was earlier this season in League Two on 12 August 2017 at Meadow Lane, Jorge Grant bagging a brace in that game.

County's last visit to the Proact Stadium came in September 2014 when strikes from Blair Adams and Georg Margreitter meant the points were shared between the two sides.

October 2011 was when County last won away at the Spireites thanks to an own goal from Drew Talbot to go with earlier efforts from Ben Burgess and Alan Judge.

Chesterfield have not beaten Notts at home in a league game since August 2009.

The Magpies have won four of their last six league matches against the Spireites.

County's 2-1 win in their last away at outing at Forest Green was their first in seven in all competitions - they haven't won consecutive matches on the road since September.

Kristian Dennis has scored 15 of Chesterfield's 37 goals in League Two this season (40.5%), the highest proportion of any player in the competition.

Nobody knows the date when the first incarnation of Chesterfield Football Club was formed.

A Derbyshire Times newspaper report from 2 January 1864 noted a scheduled game between "Chesterfield and Norton football clubs", suggesting that a club in the town was active from at least 1863.

By contrast, club historian Stuart Basson had placed a formally constituted Chesterfield FC as being established as an offshoot of Chesterfield Cricket Club in October 1867.

The early history of the club is dotted with tumult and instability - the club lost the right to play at Saltergate following worsening relations with Chesterfield Cricket Club, while in 1915 the subsequent incarnation of the club, Chesterfield Town, was put into voluntary liquidation.

To fill the footballing gap left in the town, Chesterfield Borough Council reformed the club on 24 April 1919, giving it the name Chesterfield Municipal F.C.

After the Football Association and Football League made it clear that they were against a council-run club, the entity became independent, reflected in the name change to Chesterfield F.C. in December 1920.

The club have been successful in terms of minor silverware, winning the Fourth Division (and its subsequent reincarnations) a record four times, while also claiming the Anglo-Scottish Cup in 1982 and the Football League Trophy in 2012 (and finishing runners-up in 2014).

The 1996–97 season saw Chesterfield beat six clubs including Nottingham Forest to reach the semi-final of the FA Cup for the first time. The semi-final match against Middlesbrough was drawn 3–3 after extra time; Chesterfield lost the replay 3–0.

The club's nickname, The Spireites, comes from the Church of St Mary and All Saints in Chesterfield, famous for its crooked spire.

Chesterfield will welcome back Louis Reed, who served a two-match ban after picking up 10 yellow cards.

Louis Dodds is hoping for a start after coming off the bench at Cheltenham last week following a calf complaint.

Notts will be without on-loan defender Ben Hall, who is away on international duty with Northern Ireland Under-21s, so Shaun Brisley is likely to come into the side.

Midfielder Liam Walker is also absent as he's away with Gibraltar.