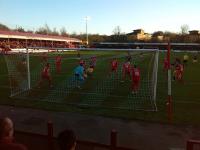 Just when it seemed that Notts County would turn another corner, comes another poor display of football that sees us pick up no points and leave us in trouble once again. Today’s 1-0 defeat to Crawley Town means we slip once again to the foot of League One. And so we end 2013 at the bottom of the league and, the halfway point passed, fears of us playing next year in the bottom tier of the Football League are becoming more and more founded.

Crawley were on the front foot early on, winning two corners in the first minute. Jack Grealish blocked Sergio Torres’ shot, while Alan Sheehan dealt with a Nicky Adams attempt.

In the sixth minute, Notts had the first chance of the game, courtesy of their first corner. Sheehan’s header was cleared off the line by Andy Drury, while a Callum McGregor free kick was met by Morgan Fox, whose volley was wide.

However, Crawley were intent on securing the win. On 12, Jamie Proctor’s mis-hit shot, following a great cross by Adams, let Notts off the hook, while seven minutes later, Mike Jones unleashed a 20-yard shot required Bartosz Bialkowski to make a neat save to his left. Emile Sinclair also weighed in with a low effort.

Notts had a good chance to take the lead a little later on, but Mark Fotheringham’s volley wasn’t hit very well following a good Fox delivery headed on by Showunmi.

Just before the break, Jamal Campbell-Ryce was upended in the Crawley box, but the referee wasn’t interested. At the other end, Bart was beaten by a Sinclair effort, but luckily the shot went wide.

The second half saw Notts begin brightly, but Crawley would take the lead in the 54th minute, a simple goal from a corner which was headed in by defender Mark Connolly.

The rest of the game, save from a good effort by substitute Murray, was all Crawley. Countless shots rained upon the goal, but luckily for Notts, Bart was on absolutely amazing form, keeping the scoreline respectable.

Things would get even worse for the Magpies, as Alan Sheehan was sent off with eleven minutes to go. The full-back was given a second yellow, and so he walked. Yet another Notts game to finish with ten men.

When the game finished, 1-0 was actually a very flattering result, considering how many we could have conceded were it not for our sterling keeper. And much as this is a taboo to mention, with the January transfer window looming, who wouldn’t be looking at a player of Championship, possibly even Premiership standard, playing for a team sitting at the foot of the third tier, and decide to make a bid?

If he does, then our League One status is as good as gone.