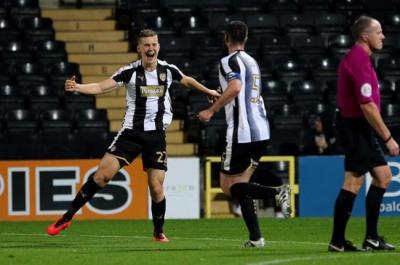 Notts County remain level on points with League Two leaders Luton Town and sit five points above the playoff places thanks to a last-gasp 2-1 win over Colchester United.

Neither side was able to open the scoring by the break, although the U's were the better side in the opening stages, but Kevin Nolan's charges soon got into gear and weighed in with several dangerous chances.

In the second half, however, the Magpies stepped up a gear and should have had a penalty on the hour mark.

Matt Tootle's pass found its way to Lewis Alessandra and the winger fired an effort towards goal, only for Frankie Kent to block the shot with his hand, but nothing was given by the referee.

Colchester's resistance was finally broken midway through the second half when Ryan Yates was hacked down by Mikael Mandron in the area for a penalty which Shola Ameobi rattled home.

The U's were then given a golden opportunity to equalise from the spot themselves ten minutes later when Ryan Jackson was fouled in the area by Grant, but Ross Fitzsimons pulled off a great save down low to deny Mandron.

It looked as though the points would be shared when Terry Hawkridge gave the ball away in a dangerous position and the visitors got forward, with Sanmi Odelusi clinically slotting past the Notts keeper in the 89th minute.

However, the hosts found a winner four minutes into injury time as Yates headed in at the back post after Grant's corner was flicked on to send Meadow Lane barmy.