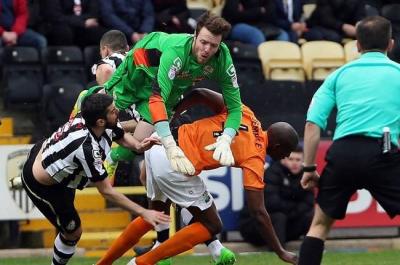 The 33-year-old has been sidelined for two months after suffering ligament damage in October's 2-1 win over Barnet.

Collin limped off in the second half of the match after taking a blow to the knee and was replaced by Ross Fitzsimons, who has done an admirable job in between the sticks ever since.

However, Notts have been boosted by their first-choice keeper's return to fitness, although Thomas suggested that he won't be rushed back into action just yet.

“Adam is back to full training now,” Thomas told the Nottingham Post.

“We are managing his load in the sessions when we are taking him out momentarily. We’ve just got to manage him back in now.

“It’s aerobic fitness that’s important rather than the knee so much because fitness can fall off when you are out injured.

“It’s just that side of it but he’s moving well. He looks like he’s never been away if I am honest. The lads are clearly pleased to have him back around the place so it’s all good.”