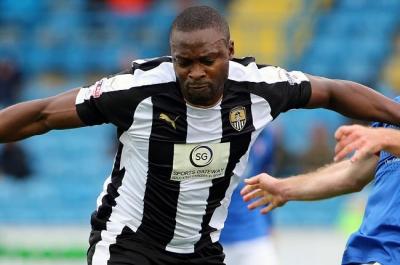 Colchester United captain Luke Prosser has spoken of the incident where Notts County's Shola Ameobi allegedly elbowed him in the chest, and says he received an apology about it after the game.

Just before half time, the veteran Magpies forward appeared to elbow Prosser in the chest, although referee Brendan Malone chose to take no action.

Ameobi went on to score County's second goal in Saturday's 3-1 away win at the Weston Homes Community Stadium, which kept them in the hunt for a top seven spot.

“I went to see the doctor, and have just looked at the incident in the physio room,” Prosser is quoted by GreenUn24 as saying. “I got an elbow straight in the chest. He (Ameobi) apologised to me after the game, put it that way.

“It’s part-and-parcel of football, but obviously it didn’t go our way. To be fair, we were having a bit of a tussle before we went into the box and I was looking across when he made a connection with me.

“It looks like he struck out, looking at the video, but that’s not the reason why we lost the game. It’s a big decision, but we have still got to defend crosses that are coming in, and you’d always rather there were 11 versus 11 on the pitch, to make it a better game.

Asked whether he thought about taking out revenge, Prosser joked: “He is a lot bigger than me, and you have to pick your battles! And it’s fine now, though on another day, he shouldn’t have still been on the pitch, maybe.”