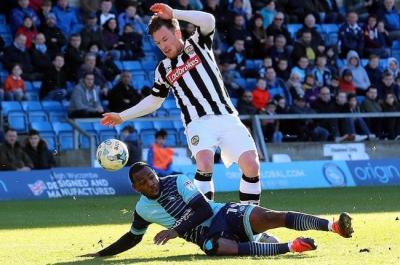 Kevin Nolan has piled praise on Notts County defender Matt Tootle following his impressive performances for the club this season and vows to remain fully supportive of him.

The 27-year-old notched up his third assist in four games in the 1-1 draw against Carlisle United last weekend when he set up Ryan Yates for the equaliser at Brunton Park.

Aside from his assists and all-round performances, Tootle also weighed in with a goal of his own against Lincoln City, a well-taken shot from a tight angle just inside the box.

“He’s come through Crewe’s academy and anybody who comes through there you would expect them to be good technically and good on the ball," Nolan told the Nottingham Post.

“They have that vision and they are taught that from a young age. We’ve been delighted with him. He’s a fantastic lad. He trusts me and knows I want the best for him.

“It’s given him that confidence that he knows I am right behind him. I think he played in a number of positions before I came in and when I got here I wanted him to be right-back and cement that place.

“He’s been brilliant this season as have the majority of the lads.”