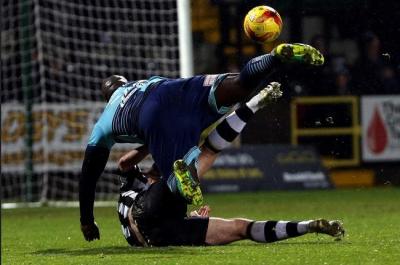 Richard Duffy is happy for Notts County to be known and established as a side with a solid, watertight defence as he aims to lead the team to an eighth unbeaten game in all competitions today.

The Magpies have kept four clean sheets in seven games, virtually overturning the calamity that was Coventry City away, to set up a League Two clash at Crawley Town this afternoon from the dizzying heights of second in the table.

Duffy, this season's skipper for Notts, also praises his defensive partnership with centre-back teammate Shaun Brisley, and is happy enough with his tenure as captain so far.

In an interview with the Nottingham Post, Duffy said: “I’ve really enjoyed [working with Brisley], obviously the results make it a lot better. I think we work well on the pitch, we talk to each other and off the pitch we talk quite a bit in training.

“We’re learning each other’s games, what’s the strengths and what we’re not so good at and we can cover each other on those things. I’m really enjoying playing (with him).”

“The first game of the season was disappointing but we’ve bounced back really well since then.

"It wasn’t great; we were way off the mark on the first day which was disappointing. The previous six games we’ve put that to bed and shown what we can really do.

“I think we’re solid, we’re compact and defending well as a team and we’re attacking as a team. Everything we do, there’s no individuals out there. The work we’re doing on the training ground is really paying off.

“I feel as though I’ve done alright [as captain]. Four clean sheets in seven games says it all really for the whole team, especially the back-four and the goalkeeper. That’s what we try to pride ourselves on, clean sheets and keeping the ball out of our net.

“We’ve got to keep working hard and not get too far ahead of ourselves. After the first day, if you’d have said we’ve have won five and drawn one, most people would have snapped your hand off. It’s been really good.

“The club has a bit of stability at the minute, and we’ve got to get that on the pitch and get as many points as early as we can and see where we go from there. We’re definitely solid, I’ll take solid all day long as we win games.”