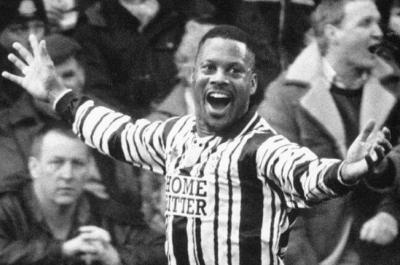 When it comes to what makes a certain player a club legend, there can be several reasons.

You get those players who give years and years of service to a club, you get those who have elevated the club to dizzying heights in terms of success and silverware, and then you get those who are responsible for moments of magic which become immortalised within the club culture.

"Sir" Charlie Palmer is arguably the latter. Although the defender enjoyed a fairly long stint at Notts County, turning out between 1989 and 1994, clocking up 182 appearances and helping the club enjoy one of the finest times in recent history, it is one particularly goal and the ensuing entry in the history books which have earned him a Magpie knighthood.

Born in Aylesbury on 10 July 1963, Palmer came through the ranks at Watford, joining the Hertfordshire club as an apprentice at a time when Graham Taylor was manager there. He made his first-team debut in 1981 and played 18 matches in total for the Hornets, including four in the UEFA Cup.

In 1984, he upped sticks and moved to Derby County and, under the tutelage of Arthur Cox, was part of the team for just under three years, helping them win the Second Division in 1986/87.

Before the end of that season, however, he moved on again, this time to Hull City, for a transfer fee of £30,000, and remained there for two years before he was snapped up in February 1988 by a young manager called Neil Warnock to play for Notts County.

It was here where Palmer would enjoy the finest moments of his career. He played 11 times as the Magpies secured a ninth-placed finish in Division Three, and he remained firmly in first-team contention the following season, playing 39 league games as Notts finished third and then navigated the playoffs up into Division Two.

In 1990/91, Palmer went from strength to strength, making 42 league appearances as Notts finished fourth, and once again they had a chance to earn playoff promotion - which as we all know, took it with both hands to make the Magpies a top-flight club.

Although County's First Division dream wouldn't last long, there would still be more opportunities for Palmer to etch his name into Notts folklore, and it came on 12 February 1994, when the Magpies hosted Nottingham Forest.

A crowd of 18,655 crowd watched as Gary McSwegan put the Magpies ahead just before the hour, but it looked like it would end all square when Dave Phillips equalised in the 85th minute.

But fortune would favour Notts that day as, just a minute later, Notts won a free-kick on the left which the referee ordered to be re-taken, Mark Draper swung it towards the back post, and Palmer leapt above Stuart Pearce to nod home.

It was his first goal for two seasons and his first League strike since 1990, but undeniably his best known and most celebrated strike - especially given how it remains the last time Notts beat Forest in the league.

Palmer would go on to leave Meadow Lane at the end of the season, but there was still time for one more Wembley appearance, taking on a Georghe Hagi-inspired Brescia in the final of the Anglo-Italian Cup.

The latter years of his career would see him enjoy a two-year stint at Walsall before playing in the non-leagues with Burton Albion, Moor Green and Hinckley United.

When Palmer retired from playing football, he became a social worker, but before long was back in the game, coaching at Mickleover Sports, where he was caretaker-boss for a while, and enjoying managerial stints at Long Eaton United and Belper Town.

But no matter what club he is at, he will forever be remembered for his dramatic goal against the Reds and for his solid service at Meadow Lane - so arise "Sir" Charlie Palmer!