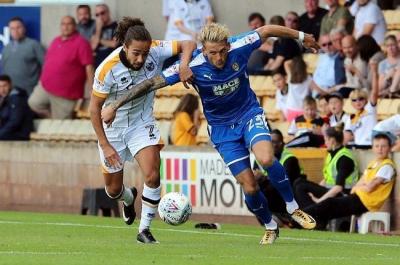 Head to head and stats

Notts County have met Port Vale 102 times over the years, with the first two fixtures coming within a week of each other back in February 1921.

Our last meeting was on September 2 this year, with County winning 1-0 at Vale Park.

None of the last 17 league matches between these sides has ended as a draw - Notts County have won eight and Port Vale have won nine of those 17 games.

The Valiants, 1-0 winners in this exact fixture in the third-tier in February 2015, haven't won back to back league matches at Meadow Lane since January 2002.

Port Vale have lost nine of their last 11 league matches on New Year's Day, drawing the other two - they last won in 1990, hammering Ipswich 5-0 in a second-tier fixture.

Port Vale is one of the few English league clubs not to be named after a geographical location.

The name Port Vale exists on maps pre–dating the formation of the club, which probably occurred in 1879, and is a reference to a valley of ports on the Trent and Mersey Canal, associated with the city's pottery industry.

The club itself is actually based in Burslem, one of six towns that make up the city of Stoke-on-Trent.

Port Vale have never been in the top tier of English football, and the last time they were in the second tier was back in 1999-2000.

In terms of silverware, the Valiants have won the Staffordshire Senior Cup twice, in 1920 and 2001, whilst being runners-up in 1900 and 2010, as well as several other regional cups like the Birmingham Senior Cup, one of the oldest county football competitions still active.

The club, despite being fairly small, enjoys the support of some world-famous celebrities, including singer Robbie Williams, darts legend Phil "The Power" Taylor, and Blue singer Simon Webbe.

Boss Kevin Nolan was hopeful the trio might return to face the Robins after missing the clash against Morecambe, but none of them made the matchday squad for the game at the County Ground.

Richard Duffy dropped out of the squad altogether after being substituted on Boxing Day and could miss out again.

Matt Tootle, Carl Dickinson and Terry Hawkridge were brought into the team on Saturday and will be hoping to keep their places.

For Port Vale, James Gibbons is back in contention as he returns from suspension.

The defender has missed the last four games after being handed a second red card of the season in the recent FA Cup defeat at Yeovil.

The Valiants extended their unbeaten league run to five games with an emphatic 4-0 win against Luton on Saturday, so manager Neil Aspin could be tempted to go with the same XI.

Defender Kjell Knops remains a long-term absentee due to a knee injury, as does Adam Yates, who is recovering from fractures to his nose, cheekbone and eye socket sustained in November.