Match Report: Notts County up to third in League Two with draw at Cheltenham Town 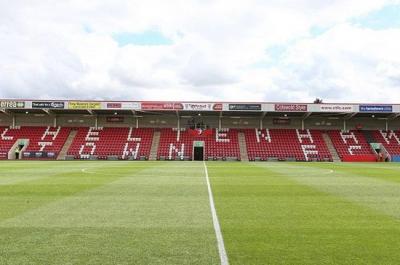 Notts County have moved into the top three of the League Two table thanks to a 1-1 draw at Cheltenham Town on Tuesday night.

Originally meant to be played on Saturday afternoon, the fixture at Whaddon Road was moved back due to the adverse weather.

The hosts weighed in with the first effort as Kevin Dawson fired an overhead kick wide while, at the other end, Jon Stead's cross failed to find a teammate's foot to send it goalwards.

Some neat play in middle then lead to a chance for Mohamed Eisa, who got the better of Matt Tootle but could only flash his effort wide.

There was then a controversial moment after the quarter-hour mark when Taylor Moore's soft header back to Scott Flinders was intercepted by Stead.

The veteran forward tried to take the ball round the Robins goalkeeper and was felled in the process, but despite protests from the Notts contingent, no penalty was given.

Nonetheless, the Magpies did go on to break the deadlock shortly before half time through Terry Hawkridge.

Stead got the better of Jamie Grimes down the left and cut the ball back to Hawkridge at the back post, who took a touch and rifled home through a crowd of bodies.

Notts began the second half brightly as Jorge Grant broke away and played a one-two with Shola Ameobi, but the loanee's effort on the slide was eventually gathered by Flinders.

Joe Rodon then turned a dangerous cross out for a corner, and the resulting set piece was volleyed into the side netting by Ameobi.

However, it was Cheltenham who would score the second goal of the game, Joe Morrell's low shot from 25 yards deflecting off Ben Hall and beating the outstretched hand of Adam Collin on 67 minutes.

In the latter stages, Brian Graham was denied by Collin and Eisa was close to winning it for Cheltenham with a free kick in the 85th minute, but Notts held firm for a share of the spoils.