Adam Collin glad to be back in action for Notts County 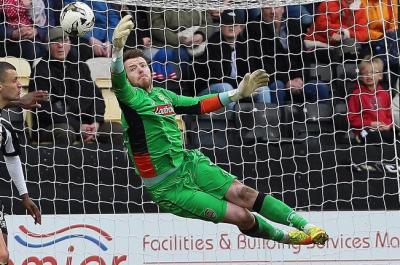 Adam Collin has expressed his relief at being back in action after missing several months out through injury.

The Notts County goalkeeper injured his knee in the 2-1 win over Barnet on October 14 and only returned to action in the 1-1 draw with Swansea City in the FA Cup just over a week ago.

“I feel okay because it wasn’t planned for me to come straight back into the team against Swansea,” Collin told the Nottingham Post.

“A couple of reserve games would have been nice, but I had to come back in and I was pleased to give a good account of myself.

“It was really frustrating to get injured because up until the point I got injured, I was probably having the best season of my career.

“I had six clean sheets out of 13 games and was on my way to keeping my seventh when I got injured against Barnet.

“To miss out through my first injury as a professional footballer was frustrating. I am just glad to be back now, fit and playing.”

Share your thoughts about this news story on Football Manics by signing up for FREE to the website, visiting the forum and joining the chat with fellow football fans.