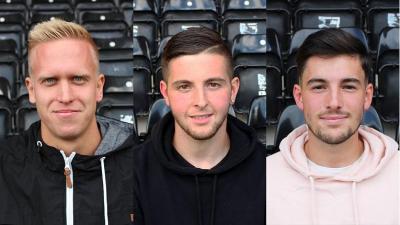 Notts County have announced three signings in one fell swoop on Monday evening with Branislav Pindroch, Pierce Bird and Callum Saunders all putting pen to paper on deals at Meadow Lane.

Pindroch is the first Slovakian to be on the books at Notts - born in the central city of Banska Bystrica, the 25-year-old came through the ranks at FK Dukla Banska Bystrica before joining Czech club MFK Karvina in 2013.

The goalkeeper had been on trial with the Magpies and came off the bench during the recent friendly against Nottingham Forest.

Defender Bird, meanwhile, had also tried out for Notts and scored the winning goal in the victory at York City last weekend, the 18-year-old working as a civil engineer in a factory before penning a deal at Meadow Lane.

Striker Saunders, the son of former Liverpool striker Dean, has also been on trial with the club and scored in the friendly victory over Alfreton Town.

The 21-year-old came through the academy system at Crewe Alexandra, scoring twice in 35 appearances for the Railwaymen before being released at the end of the 2016-17 season.