Shola Ameobi: 'I do not feel I have the passion for coaching' 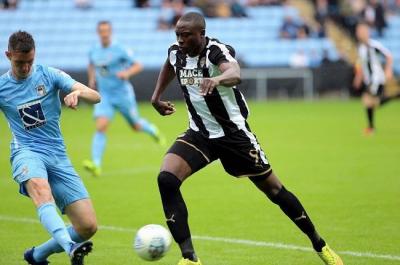 Shola Ameobi has admitted that he is not outwardly looking to go into coaching once he hangs up his boots but has not fully closed the door on a potential switch to the dugout.

The 36-year-old, who is in his 20th campaign as a professional footballer, is to make a decision on his future at the end of the season.

Notts County boss Kevin Nolan has said he would welcome Ameobi as a coach at Meadow Lane, but the veteran striker admits he doesn't feel he has a passion for it.

“Obviously management is something you think about and people have mentioned in the past that I’ve got the mentality for it,” Ameobi told the Nottingham Post.

“But it’s not something I’ve ever thought that ‘I want to go into it’.

“You could see with the manager here that he had that authority in any situation. You could sense he always had that destiny whereas for me I don’t have that sense myself.

“It’s something that if I do go into then I will give it my all. But it’s not something I feel I have a passion for.

“There are stresses and strains and it takes a lot out of you - especially at Newcastle where they’ve had to deal with a lot.

“Some people make it look seamless and others don’t. I’ve seen both sides of it and I’ve seen how much you have to give.

“It’s tough because football has been my whole life. But part of me just wants to be there for my family and my kids, especially the age they are.

“In management you don’t get that and I’ve seen with Kevin that it’s stressful. But I am not saying I am never going to do it because sitting out the game six months, I’ll know I’ll miss it.”