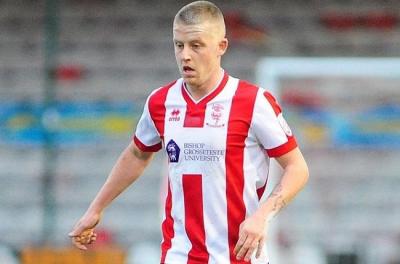 Notts County have made their first signing of the 2016-17 post-season by recruiting Lincoln City winger Terry Hawkridge on a two-year deal.

The Nottingham-born 27-year-old was part of the Imps side which cruised to National League glory this year, helping Danny Cowley's boys into League Two as well as the quarter-finals of the FA Cup.

Speaking to the official Notts website, Hawkridge - who played for Carlton Town and Hucknall Town early on in his career - said: “It was a tough decision to leave Lincoln.

"However, I feel I have unfinished business here having been released as a kid. It’s my home city – I’m originally from Top Valley – so I am buzzing to be here.

“I’m looking forward to getting started and learning a lot from the experienced players in the squad, as well as the manager.

“I didn’t know what was happening after the National League season finished but now I have signed here I can go away, enjoy a short break and come back ready for the first day of pre-season training.

“I’m a winger who can play on either side but I like to cut in from the left. I’ve got a bit of pace, I can cross with either foot and I have some tricks up my sleeve. I know I can bring goals and hopefully create some special memories here.”