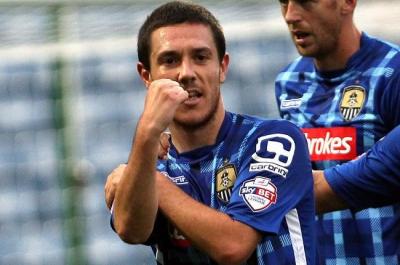 Notts County have claimed another vital three points in their quest to secure automatic promotion from League Two thanks to a 2-1 win over Forest Green Rovers at the New Lawn.

Former FGR captain Liam Noble, not very well liked at Nailsworth following his defection back to Meadow Lane last year, was true to the match script as he haunted his former club with the opening goal for the visitors.

The Magpies began brightly against a sloppy FGR backline, with Elliott Hewitt coming close early on when he saw his shot deflect across goal and just wide of the post.

Adam Collin then had to be alert to keep out a Reuben Reid effort on 20 minutes but the hosts' risky defensive ploy of passing the ball out from the back ended up costing them on 34 minutes.

Stead dispossed a defender on the edge of FGR's area and the ball made its way via Jorge Grant to Lewis Alessandra, who was brought down by goalkeeper Brad Collins.

As the ball broke free, the referee opted to play the advantage and it proved to be the right call as Noble was on hand to seize the loose ball and tap into the empty net.

The Magpies continued to launch attacks as Alessandra found the side-netting with a shot from a narrow angle and Stead curled a left-footed effort wide, but 1-0 is how it stayed at the break.

Mark Cooper's side was more with it after the restart as Chris Clements forced Collin into tipping a shot around the post before Gavin Gunning nodded over the subsequent corner.

Tahvon Campbell's introduction then helped Forest Green draw level as he was put through in the Magpies area and kept his composure as he fired into the roof of the net from a narrow angle.

Notts set about trying to get ahead again and duly found the winner when Alessandra played in Matt Tootle, who rifled the ball through a crowd of bodies and into the far corner before unleashing the famous "slug" celebration.

Matty Virtue then had a glorious chance to add a third for Notts after being put through by Grant but the Liverpool Under-23 captain's sidefooted effort could not beat Collins in the opposition net.