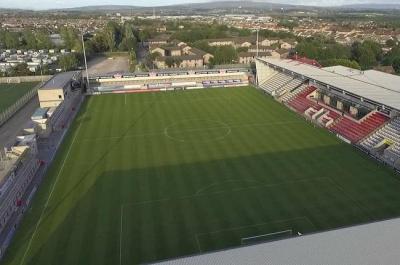 Notts County have returned to winning ways in emphatic fashion with a 4-1 win over Morecambe at the Globe Arena.

Kevin Nolan made four changes to his side, taking into consideration the glut of festive games and also injuries to Shola Ameobi and Jonathan Forte.

The opening stages of the Boxing Day game in Lancashire were cagey but Notts were soon up and running with a 13th-minute breakthrough.

Former Magpie Adam Campbell gave the ball away sloppily in his own half, which prompted an assault by the visitors.

Lewis Alessandra edged into the box and cut the ball back for Jorge Grant to rifle home from 10 yards.

Notts then doubled their lead on 21 minutes, the provider turning goalscorer when Morecambe failed to clear their lines from a free kick and Alessandra half-volleyed beyond Barry Roche.­­­­

The Shrimpers ended the half strongly as Andy Fleming twice fired efforts wide from 20 yards, Garry Thompson headed straight at Ross Fitzsimons from close range and Campbell volleyed a Thompson cross over from close range.

However, Notts went on to add a third just before the hour when Grant exchanged passes with Jon Stead before sliding the ball past Roche.

The rout was completed four minutes from time as Alessandra joined Grant in netting a brace, the winger scoring at the second attempt after Roche had kept out his initial shot.

Although Callum Lang sullied County's clean sheet with a curling effort over Fitzsimons from the edge of the box, it would prove little more than a consolation for the beleaguered hosts.

The result keeps Notts four points behind Luton Town, who won 5-0 at Swindon Town -  County's next opponents - but crucially, it puts the Pies seven points clear of fourth place.