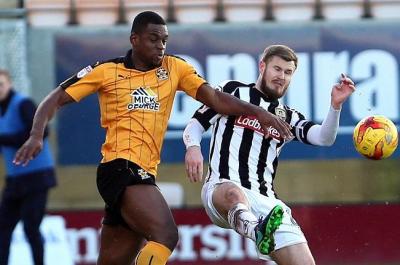 Kevin Nolan has provided a positive update on Michael O'Connor, saying the Notts County captain is "well on the road to recovery".

The Northern Irish midfielder and club captain has been out of action since last April when he suffered a knee injury in the defeat to Portsmouth which required surgery to repair ligament damage.

A long layoff has ensued but Nolan is hopeful Occy will be available to join in full training in a fortnight's time, albeit in strictly non-contact sessions.

“It’s always nice to have somebody on the outside see how good it is going and he has come back with a program and hopefully in the next couple of weeks he will be joining in.

“It will be on a non-contact basis but he will be involved in possession sessions because he’s not ready for tackling yet.

“But he is well on the road to recovery and touch wood it will continue. I am very hopeful he will play again this season and I do think you will see Michael O’Connor in a shirt.

“He is very confident and doing very well, but it’s just little steps. We don’t want to rush him and do anything daft because we are talking about a lad’s career here. His welfare is most important first and foremost.”

Nolan also spoke about Shaun Brisley being the latest player to catch the virus sweeping through the Notts camp.

"We got a call yesterday saying Shaun had come down with the flu so he is off until Thursday and then we will see how he is," the gaffer told the Notts site.

"But I thought Ben (Hall, Brighton loanee) was absolutely magnificent and had a fantastic debut. That is why we brought him in and he's taken his opportunity with both hands and I'm delighted for him.

"It's going to be tough for Shaun to get back into the team."