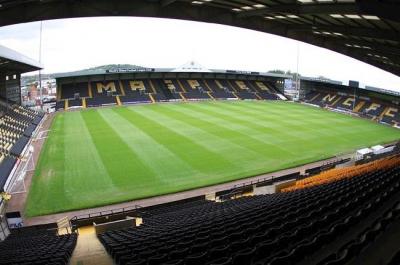 In a game of few genuine chances, the Magpies failed to muster a single shot on target against a Mariners side that defended well but likewise couldn't break down the hosts.

An early shot from Shola Ameobi was deflected wide for a corner, which was eventually cleared after Elliott Hewitt had initially won the ball.

At the other end Jamille Matt had an effort deflected into the arms of Ross Fitzsimons, who was then called into action four minutes later to keep out a Jorge Grant clearance that deflected off Luke Summerfield and looped back towards goal.

Matt then came close on 21 minutes when he picked up Diallang Jaiyesimi's pass before firing on the turn, only for Fitzsimons to block with his legs for an opposition corner.

A foul by Zak Mills gave Notts a free kick in a dangerous position on 27 minutes but Grimsby keeper James McKeown got a glove to the ball before Nathan Clarke was able to clear.

The hosts then enjoyed a period of pressure as Carl Dickinson then tested the opposition keeper with a free kick and, on 35 minutes, won three corners in succession, but couldn't find a breakthrough come the half-time whistle.

Both sides enjoyed chances early after the restart, with Sikiri Dembele blasting off target while Ryan Yates headed Jorge Grant's free kick wide of the near post.

Notts felt they should have had a penalty when McKeown clattered into Jon Stead near the left corner flag but the referee decided to just show a yellow card.

Kevin Nolan's side dominated the majority of the second half, Grant coming close with two efforts and Ameobi head wide from Lewis Alessandra's cross, but the final whistle saw the points shared between the two sides.