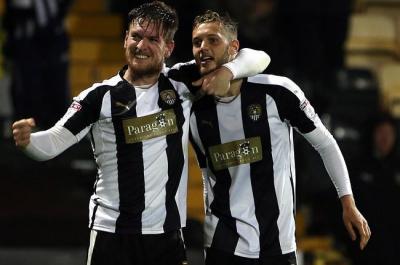 Notts County continue to march on in their quest for promotion from League Two with a solid 3-1 win over Cheltenham Town in Saturday's game at Meadow Lane.

The Magpies were quick out of the starting blocks against the Robins, who were 16th in the table at kickoff, with Terry Hawkridge forcing a chested block from goalkeeper Scott Flinders after just three minutes.

Jorge Grant and Ryan Yates then weighed in with efforts which were blocked as the visitors struggled to weather the hosts' attacking play, while Shaun Brisley hit the side netting.

Jon Stead was next to threaten as he rifled narrowly wide after turning to collect a far post header back across goal, and Matt Tootle's swerving drive forced another save from Flinders.

Eventually Kevin Nolan's charges broke the deadlock on the half-hour mark as Carl Dickinson’s crossfield pass into the box was headed down to Stead, who sized up a shot but instead decided to lay the ball off for Grant.

It proved the correct decision as the Nottingham Forest loanee side-footed the ball into the top corner of the Cheltenham net to put the Magpies ahead.

However, the visitors drew level out of the blue just five minutes later, the Notts defence guilty of switching off as Carl Winchester and Kyle Storer exchanged passes before the former drilled a low effort into the bottom corner.

It could have gotten even worse for Notts in the second half as Cheltenham turned the screw and Harry Pell hit the top of the crossbar from a cross with Ross Fitzsimons struggling to scramble back.

The new Notts, however, have more grit about them and, on 52 minutes, the unplayable Grant grabbed his 13th of the season when his 25-yard free kick took a heavy deflection and wrong-footed Flinders en route to the back of the net.

And just two minutes later, a two-goal lead was established through Shaun Brisley, who finished off a move begun by a corner flicked on at the near post by Richard Duffy into his fellow defender's path, heading home to send Meadow Lane into a frenzy.

Notts continued to push forward and Jorge Grant came close to sealing what would have been a well-deserved hat-trick when he weaved through the Robins defence but couldn't get the ball past Flinders.

And although Cheltenham mounted a late fight-back, they couldn't get so much as a second goal to make things nervy as the Magpies saw the game out and built up their lead at the top of the table.