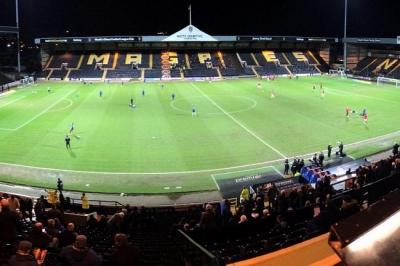 Notts County got their Checkatrade Trophy campaign off to a winning start with a 2-1 victory over Everton Under-21s in Tuesday's fixture at Meadow Lane.

The game was played out before a largely empty stadium as many fans boycotted the competition due to what they see as the Premier League imposing itself on the EFL, but there were still just under 1,500 people in the stands - arguably one of the evening's better attendances across the country.

Kevin Nolan made a total of nine changes to his starting XI and they started on the front foot against a young team which looked almost overawed by the occasion in the early stages.

Indeed, Notts took the lead on the half-hour mark when Jorge Grant nodded a header into the path of Jonathan Forte, and the striker controlled, turned his man, and drilled the ball into the bottom corner.

It wasn't long before the Magpies doubled their advantage, Elliot Hewitt heading a deep centre across the face of the goal and Haydn Hollis being given the simplest of tasks to prod the ball over the line from two yards out.

Everton were more impressive after the break and duly halved the deficit as substitute Anton Donkor picked up the ball in space on the left of the County penalty area before rifling a ferocious shot that found the net via the foot of the post.

The hosts were able to see the game out without too much difficulty, and the relatively low number of fans in attendance were pleased with Notts having put in a solid performance, but in all honesty, the whole thing felt like a friendly.

The focus of all fans now - boycotting or not - will turn to what really matters; the League Two encounter with Wycombe Wanderers this weekend.